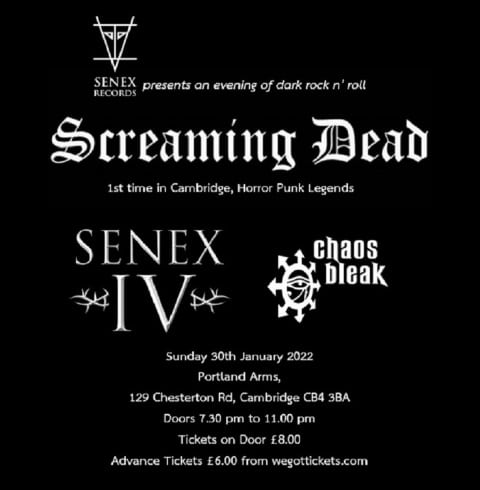 Screaming Dead are a horror punk rock band from Cheltenham formed in 1980. They released several singles and EPs with indie chart success, before splitting up in 1985. They reformed in 1997; disbanded again in 1999; and reformed in 2014.

Screaming Dead have been an inspiration to many bands in the Horror/Punk/Goth genre. Simply put, they are unique, genuine and full of energy, there really is nothing Dead about the Dead….

From the ashes of bands from the 80’s onwards, comes the new dark sounds of SENEX IV. A four piece band from Suffolk whose music crosses the shadowy recesses of early 80’s post-punk and goth’s embroyonic stages. Where the lines between the two are immensely blurred.

Nottingham’s finest, again with histoy. Chaos Bleak take inspiration from the early post-punk sound, before The Sisters became the template. What would Play Dead sound like if they formed in 2019?